I don’t bake pie. My aunts (wonderful cooks themselves!) and my dad know how to make good pie. I enjoy eating a good pie, but I’ve never been able to master pie. It’s the crust that screws it up. I’ve tried several different methods – all butter, butter/crisco mix, food processor, by hand, with knives, with a pastry tool – to no avail. So when I looked at the cover of July’s Bon Appetit, I thought my time had come. A pastry with a fairly forgiving crust that I could use to kick off my “cook the cover” posts for 99cookbooks. Needless to say it would turn out to be a bit more challenging than I thought – primarily due to my parenting skills. (Or lack of, it turns out on this day.) 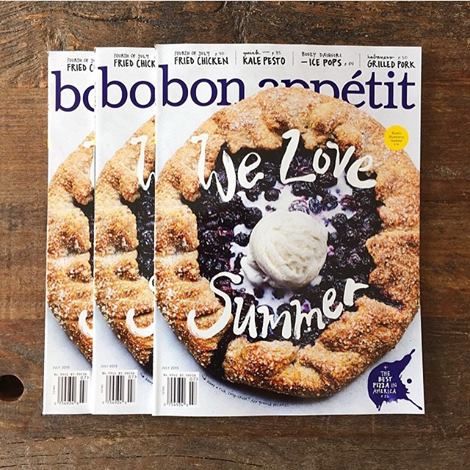 I decided to make the galette for the 4th of July. It’s a nice patriotic dessert, but not over the top. Some of the stuff on Pinterest for the 4th made my head spin. Do I REALLY want to make a strawberry jello in the shape of an American flag? No thanks. Of course, if I want to eat tasty pastry, I need to burn a few calories, so I went for a run in the morning. Or at least attempted to run, as I pulled my calf muscle about a half mile in. (I’m not particularly athletic, but I’m trying.) I originally thought it was just a cramp, so I decided to walk it out – for the next two miles. Jeff didn’t have to pick me up (a miracle) but my left calf was sore. Limping sore. Ice pack and icy-hot sore. Turns me into a cranky mama sore. Most normal people would probably pass on making pastry when they feel bad. But did I? Nope. I decided to not only make the galette, but to also bake fresh hamburger buns for dinner. Why bake them? Why not go to the store? Because that would require that I walk somewhere in public, which was NOT going to happen. I could hobble in the kitchen, so that was good enough.

I take the ingredients out and put them on the island, which immediately generates interest from C. He grabs the blueberries and starts eating them out of the package. I say no, not yet, and he looks me dead in the eye and shoves his hand back in. C gets a break and he cries in the corner for about 30 seconds. Then he comes back, reaches over to grab the blueberries – AGAIN – and knocks over my iced coffee. It goes EVERYWHERE. C!!!!!!! I lost my cool a bit here. Kicked C out of the kitchen and began mumbling to myself about improving our listening skills. Fail #1 in preparation. I manage to get the pastry dough together without any apparent disasters and start the yeast proofing for the hamburger buns. C is currently playing under the dining room table, keeping an eye on the blueberries but at this point has figured out that he needs to steer clear from me.

The rest of the baking experience actually goes ok. While the pastry was resting, I put the bun dough together. Then it was time to roll out the galette. Rolling out was not a problem, but I was running short on parchment and didn’t do my normal trick of rolling out directly on the paper. I will regret this later…..but in the meantime, since my calf is throbbing, I rush through the blueberries and realize that I’ve already dumped them in the pastry BEFORE moving it to the baking pan. Fail #2 for the afternoon. I scoop everything up again, move the pastry to the pan – at which points it sticks and I’m patching like crazy – and attempt to artfully form the galette. This is supposed to look “rustic” and is great for the “novice baker.” I would say about 50-50 for both areas, but I was confident it wouldn’t leak all over the oven. The galette goes in. While it was baking, C curled up with me and asked if I was still mad at him. My heart sunk a little bit – of course I was annoyed that his desire for berries had created some problems, but I was never really mad at him. But my crankiness and “momtrum” apparently made an impression. I gave him a cuddle, spent some time talking about feelings, and tried to turn Fail #1 into a fail-forward learning experience.

I’d say the final result was sorta close. I overbaked the crust a bit – it’s darker than what I would like, but the nutty crust deceived me a bit for color. My blueberries didn’t fully burst during baking also, so I gave it a light press after pulling it out. And since we didn’t even eat the galette for dessert that day (Fail #3 – too full after dinner, too tired after fireworks) I proceeded to take a beauty shot with the ice cream and then ate the galette for breakfast the next day. Another thing I learned from my family – pie (or galette, in this case) is absolutely delicious and perfectly appropriate for breakfast. Especially if it has blueberries. And by the way – C didn’t even like it. Thumbs down by both kids. But I don’t count that as a fail because then I could eat their leftover crust. That was tasty.

You can grab the recipe yourself from Bon Appetit!

If you’re interested in how the hamburger buns turned out, you can look below. Kneeding actually gave me 6 minutes of active time on my fitbit, so my day wasn’t a total wash. Win some, lose some…. 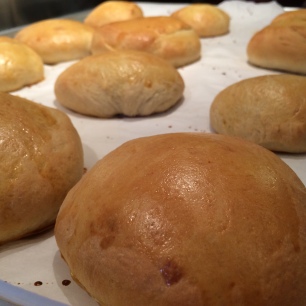 Buns on the rack! 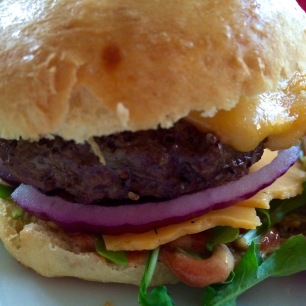 The bun makes the burger