I’ve had this cookbook for at least 10 years and I’m not sure I’ve cooked more than 3 recipes out of it. Even though our family is eating a bit more carefully to start the year, I’m going to hold the cookbook up to my same standards. It needs to taste good and be reasonable for me as a working mom and home cook. Emphasis: needs to taste good. First flip through, there seem to be some recipes that have some promise. We’ll see how it goes. 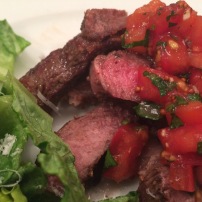 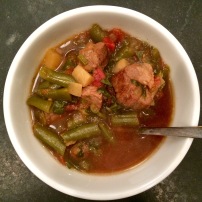 Chicken Mole after I added tomato and avocado 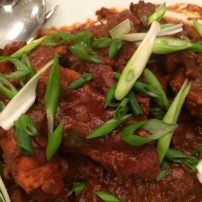 The Good
I skipped the crust on the quiche because I just didn’t want to deal with it – baked the quiche crustless right in my 10 inch non-stick. Super simple. It’s not quite like the Thomas Keller creamy amazingness I’ve made before, but considering this little guy was cream free, it wasn’t bad. H liked the California lettuce wraps until I gave her sliced apples – she preferred the new yellow Opal apples I tested out this week. (Yellow is her favorite color – and I must say those apples are darn good!) The vegetable beef soup was ok, and C seemed to like the tomato topping for the rib steaks. The tomatoes were marinated in a soy and dijon sauce that was better than I anticipated. On Saturday night we had popcorn and smoothies with our Star Wars/Empire Strikes Back marathon – awesome, but not part of the cookbook.

The Bad
I skipped the entire dessert section as I have no interest in using a sugar substitute. I have enough problems and adding a “naturally” derived sweetener isn’t going to help me along. If I want something sweet, I’m going to own it and have the real thing. The swiss and ham roll ups led to grabby hands – not for the wraps but for the toothpicks that held them together. C ate his vegetable beef soup with a toothpick. You can imagine how effective that was. Normally H would be all over the rib steak, but she has some wiggly teeth right now and I underestimated the pain – and dinnertime whining – that would result from chewing steak.

The Ugly
The chicken mole was bad all around. H made waving motions around her face, C looked at me as if I were kidding. Jeff ate it but commented that “it wasn’t phenomenal.” Leftovers are frozen for a future enchiladas with lots and lots of monterrey jack. I just can’t bring myself to eat it again in its original form. The quiche was great out of the pan, but it didn’t hold up as leftovers. Super watery. And finally, the ugly reality that the recipes were good enough but not really great. I had some additional recipes planned but I was so bored by it all that I opted for a head of celery with Hell’s Kitchen peanut butter for lunch. Best PB ever.

The South Beach Cookbook by Arthur Agatston, MD.
Overall review: 2.5 out of 5 stars.
It wasn’t a great week but it wasn’t a horrible one either. This is a classic “good in theory, not so much reality” cookbook. As I glanced through it I thought it would be a pretty good week, but it just didn’t translate. H and C didn’t really complain about food this week, but they did enjoy a lot of toast. I’m not sure if it’s because H just learned how to make toast at the independent age of 6, but regardless, the kids didn’t exhibit a lot of excitement for the menu. Of course, this may be a reflection of their mother as I exhibited doubt about the book from the start. My “eh” attitude may have been reflected in my cooking this week. On the upside, Jeff and I continue to feel lighter and generally better by cutting back on starches and sugars. It may be time to look at a different cookbook but choose a similar path next week. As for The South Beach Cookbook, if I decide to keep it on the shelf, it will be to generate ideas that I’ll look up a different recipe for. Is that a terrible reason to keep a book around?