I’ve had the flu this week. It’s just as bad as people say. After taking last Friday off as a fun day for me, I delighted in binge watching the final season of Downton Abbey and was looking forward to a nice, relaxing weekend. Saturday afternoon I started feeling a little off and just couldn’t shake the chills. I went to bed at 4:00 and decided not to get up again until Tuesday evening. Ok, not entirely true. Jeff looked at me on Sunday and said “wow, you really look horrible” to which I responded by driving immediately to urgent care. The only thing good I can say about that is that I had plenty of room in the waiting room as no one would sit within a 10 seat radius of me. A subscription of Tamiflu later and I was back to bed.

This is a cookbook blog, and it’s hard to write a review when you’re not cooking. So instead, I thought I’d share a few things that helped when I was truly feeling awful.

After a lack of tasty food for a week, we celebrated my return to the semi-living with sushi (a first for H and C) and relived the past a bit as Jeff and I went for sushi on our first date. The kids were amused by that – enough to try sushi, but not enough to actually LIKE it. H liked unwrapping it; C liked the concept of chopsticks as ninja sticks. Jeff giveth, Jeff taketh away. Isn’t that always how it goes? 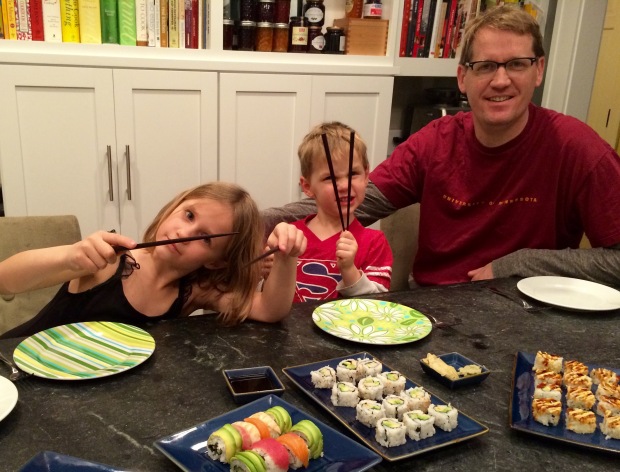 Next week – the prelude to Valentine’s Day. It been at Target since New Year’s Day; now it’s at our house with a twist. It’s going to be a chocolate themed week, but on the savory side. Cocoa nibs, anyone? Stay tuned as I review a cookbook from a bean-to-bar chocolatier in Seattle. I can’t think of a sweeter way to get back in the saddle again.